In February 2015, one of my close friends called me and asked whether I could design a website for her aunt who is a catholic nun. This friend is my batch mate and a trained architect. She only knew that I was a software engineer once and left the job to take care of my children. She made an intelligent guess that I may be interested in doing such things and may have some time to spare as kids started going to school.

It was true that I was not doing any work other than helping children with their studies and house hold chores, but I never worked on web designing, though I spend many years with IT giants like Accenture, IBM and Satyam working on Mainframe and testing assignments. I also worked on and off for an year and a half from home for SocIT, an organization providing hospital management software to charity hospitals at throw away prices. I learned Java for SocIT by myself, so I was sure that I could get the technology behind web designing easily, but not sure on the look and feel and the content of the website.

For couple of days, I browsed through the net to understand the nitty-gritty of web design and web hosting and came across few service providers who provide domain id, space in web-servers to host websites and platforms to design and develop websites. Also, I was seriously pondering on Salil’s decision to leave the job with Accenture to re-locate to Kottayam, his home town in Kerala and set up a small firm on education and software which can be operated from home. This firm too will need a website. So, it is good to try it out with my friend’s aunt’s website so that later we can have our site up and running soon. I called up my friend and offered my willingness to take up the challenge.

Few days later, I got a call late in the evening. When I took the phone, I could hear a low voice from the other end introducing herself as Dr. Aquinas Edassery, an internist (a medical doctor practicing general medicine) from St John’s Bangalore and she got my number from my friend.

Sister directly came to the point. She and a team of doctors and social workers are in Kalahandi, Orissa working among tribal people who do not have access to health and education. Team is part of an NGO named Swasthya Swaraj. Swasthya Swaraj wants to tell the world about the plight of the tribal people and the work done there. But, they are in the fields tending the sick most of the time and the means of communication they have is quite inadequate for this purpose. So, the best way is to have a website of their own and they got me to do it.

The verbal contract we had was as follows

An IT consultant in me would have never said no to the points 1, 2 and 4, but would have debated on point 3. However, I did not mind it much as this work is going to be our launching pad.

Basically, I had to focus on two things – Do the job well and Go on a shoe string budget.

Sr Aquinas has provided a soft copy of their brochure and their logo immediately and said that she will provide the rest of the content and photos soon. I understood from Sister that they had a domain name which is with a colleague of hers in US who is coming to India for some function and I can contact her. I mailed her and called her couple of times when she came to Bangalore. She told me that someone else created the domain name for her and I need to contact him. I contacted him and he passed the credentials to get the domain name www.swasthyaswaraj.org which was with the service provider GoDaddy. He also suggested the service provider Digital Ocean for web hosting.

I did an analysis on Digital Ocean and other web hosting service providers and zeroed in to Go Daddy. Needless to say, economics and our specific need of just having one site hosted played the parts here, nothing else.

I had a few more calls with Sister requesting the content and photos. During the calls, I understood a bit of the modus operandi of Swasthya Swaraj. Our friends do not have much time for me, they are traveling the length and breadth of many big villages every day to conduct medical camps and educational sessions. So, Salil and me decided to build the content for Swasthya Swaraj ourselves.

I had just a few calls with Sr Aquinas and we have the brochure. We could cut few photos out from the brochure and there is some content in the brochure. We also have their logo. Sister has connected us with one Dr. Ashish who is a junior colleague for hers and he has to be the last word on the look and feel of the site as he himself is an artist and he designed Swasthya Swaraj logo. While Salil was trying to build up the content from what we have, I started browsing through the websites of NGOs since our site should have an NGO look and it should be distinct from other sites.

I came across certain information on Swasthya Swaraj in net and as we could not authenticate this information, we just tried to digest the information and build the content. Also, we happened to see many photos of Swasthya Swaraj in google plus site of Dr. Ashish which we could download. With all these we made the first cut of the site and showed sister and her team via a skype video call. I was keenly watching sister with a pounding heart while she typed the url. I could see her curious looks while the site was downloading and it was taking a while since they had a slow connection and it was first time. At last the site came in and the change in expression in sister’s face made my day.

I did not get much time to stretch my legs, there came a couple of mails from Sister and Dr. Ashish with photos and presentations related to their work and suggestions on the color codes used in the website. We had to replace most of the content (not the design) of the website and had to do a fresh selection from the list of photos shared and the old ones we had. We tagged all the photos selected and did a sanity check on the grammar and the format of the text shared before presenting them on website.

While we went through the content, we realized the extent of sacrifice these few young men and women doing under the guidance of Sr. Dr. Aquinas Edassery. Probably, it may seem a sacrifice to us who mind own business day in and day out. To them it is a job to do and a job well done makes a lot of changes in the lives of many. 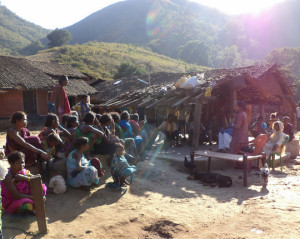 We have seen none of them in person, all we had was just a few calls with sister and couple of email exchanges with Dr Ashish. But, while designing the web and building up the content we felt like one of them. They run medical camps in villages inside the forests; walk kilometers and kilometers to reach a sick child; enable many a villager to provide care to ailing patients; empower the tribal people to take charge of their destiny and go head on with the current circumstances. We are not willing to do even 1% of what they do, we can’t even visit them as we cannot go on for a tireless travel to remote places in Kalahandi and we are afraid of malaria which is rampant there. All we could do was to sit at home and make the website for them.

We decided to do the development of website for free as a small offering to the great work Swasthya Swaraj and similar NGOs are doing in our country.

Rest is history, www.swasthyaswaraj.org was launched on the annual meeting of this organization on 27th June 2015 and it was well received. We set up our firm “For a Good Start in IT and Education”. Swasthya Swaraj is our first customer. Swasthya Swaraj gave the maintenance of the website to us for a year.

Mission of “For A Good Start” is to deliver value to our society. Needless to say, our mission is derived from our association with Swasthya Swaraj building their website.